I.
Two weeks ago, I was very curious about the Troop Greeter program and  others similar to it. I was wondering how many troops have they greeted currently? What kinds of impacts are other groups making? After a lot of research, the answers have been found.

The Bangor Troop Greeters shown in the movie, The Way We Get By,have greeted over 5500 flights with more than 1,140,000 service members and 281 military dogs. Greeting all of these people, and animals too, is an amazing feat in itself and it is wonderful to know that people are willing to give up some of their time to do that. There are many other groups around the country that have similar purposes.Other groups are not as publicized, so specific numbers and information is difficult to find. Some groups simply greet the incoming and departing troops, but some actually donate American flags, cell phones, and care packages as well. All in all, these different organizations, no matter how small, make large impacts in the lives of the troops.

II.
The past two weeks in Ethic's class, we have been covering persuasive media and advertising, along with a bit on how to make a documentary and TEDx Conferences. We watched the documentary The Persuaders, which discussed the ever-changing advertising market. All in all, these past two weeks were very interesting and highly enlightening. 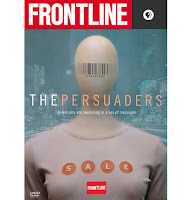 I found The Persuaders to be very interesting. Before viewing the movie, I had already known that advertisers spent a great deal of time and money coming up with their television and billboard ads. Despite this, I did not realize actually how much thought and research was put into simple 30 second commercials. I still can't believe that certain companies even use support groups and individual questioning to find out crazy ideas. I thought the most wacky of them all was when the researcher asked the man if eating white bread made him feel lonely! Exactly what kind of question is that? I don't think that bread companies target lonely white bread consumers! I feel that companies could save themselves a lot of time and unnecessary struggles by fine tuning their advertisements. Also I feel that they would earn more customers if they spent the money used on advertisements to lower the prices of the goods that they are trying to sell.
In class we talked a lot about the movie, but we never really answered the question of whether or not we actually pay attention to the swarm of advertisements. When watching television, I actually watch the commercials, unlike some people. I do though, however, only watch the commercials for entertainment only. Normally I do not choose to buy one product or the other just because of their advertisement. I buy things because of quality and reliability, not because of how flashy and unique their commercials are. This past spring break, my family and I traveled to New York City and stayed near Time's Square, which is known for it's over sized billboards and advertisements. Everywhere you look there is another flashing ad trying to make an impact on you. Time's Square, even though companies try to use it as a way to advertise, has actually become a tourist attraction because of the overuse of advertising. No one pays attention to what product is actually trying to be sold; they are looking to see which one would make the best Christmas card background or vacation photo. I sort of understand the advertiser's pain when it comes to advertising. Yes, having your product shown in every other commercial may work, but honestly I feel that quality and low prices are the way to go! 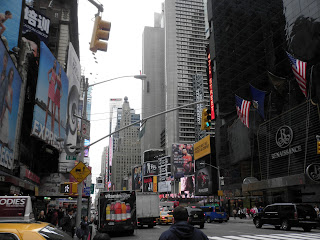 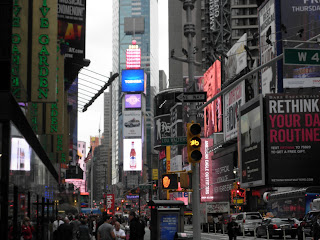 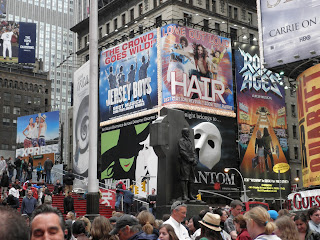 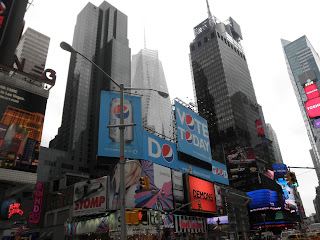 (Above are pictures I actually took in Time's Square this past Spring Break.)
III.
After all of this talk about advertising, I am really curious as to how much time and money companies actually spend on making advertisements?  What is the average price of a commercial or billboard?

Please stay tuned for the answers next week!

The persuaders. (2010, November 28). Retrieved from http://www.pbs.org/wgbh/pages/frontline/shows/persuaders/


Welcome to the maine troop greeters. (2010, November 28). Retrieved from http://www.themainetroopgreeters.com/

The Way We Get By

I.
Last week I was really interested about the elections for the U.S. House of Representatives. I wondered who would win the 7th District? Would the Republicans regain the majority in the House? After the elections on November 2nd, the votes have been counted and the answers have been revealed!

In Virginia's 7th District, the winner was Eric Cantor who won with a 59.4% majority. He was also promoted to the Majority House Leader position in the House of Representatives after formally being the Minority House Whip. The Republican party did regain control of the House despite the Democrat's efforts to retain the majority. We will have to wait and see how this change in power turns out! For our country's sake, I hope it goes alright.

II.
In class this week, we learned about the military, the elderly, and a group called the "Maine Troop Greeters". We learned background information and watched the movie The Way We Get By to learn more about the Greeters and their stories. All of these topics were centered around support for our troops and Veteran's Day that also occurred this week.

I really enjoyed the documentary The Way We Get By , and I am so glad that we were able to watch it. I thought that it had a really great message about love, commitment, and sacrifice. I feel that our troops are not appreciated as much as they should be. Because of this, I totally support the Greeters and think that they are doing a very honorable service for their community. The dedication of Bill, Joan, and Jerry is absolutely inspiring and makes me want to go out and greet troops with them! Hearing their stories, both the sad parts as well as the happy, really made me think about our elderly population. Seeing how lonely they can be and how isolated they are makes me feel really sad. I feel so bad for them, but I know that they enjoy what they do. Greeting the troops keeps them going and helps to bring meaning back to their lives. It is amazing what one handshake can do. 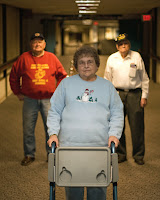 One question that was not brought up in class was whether or not we would be willing to greet troops just the Troop Greeters do. I think that I would definitely be willing to greet the returning troops and tell them how much I appreciate what they do. On the other hand, I do not think that I would be able to handle saying goodbye to the leaving troops. I don't think that I could emotionally handle it. All of the sadness in the air and knowing that some of them will not be returning would be too much for me. I think others should definitley be there to wish them off, but personally I don't think that I should be there.

III.
After all of this talk about the Troop Greeters located in Bangor Airport, I would like to know a little bit more about their impact. Currently how many troops have they greeted? Also what about other similar groups? What kind of impact are they making?

Beyond the results: house of representatives. (2010, November 14). Retrieved from http://www.washingtonpost.com/wp-srv/special/politics/2010-race-maps/house/

To Speak or not to Speak

I.
Last week I was really curious as to how the elections are going in Virginia's 7th District. I had wondered who was in the lead in the election polls? Who is perceived to win? After a lot of research, the answers have been found!
According to the Washington Post's Campaign Tracker, Virginia's 7th District has historically voted Republican in both the House of Representative and Presidential elections. Incumbent Eric Cantor has consistently been re-elected since the year 2000. He has always won by at least 62.7%, and he won by 75.5% in 2004. Judging by these facts, he is expected to win in 2010. Not only does he have the historical support, but he also has the financial support. (Cantor: $1,408,116; Waugh: $21,610; Bayne: $6,805) 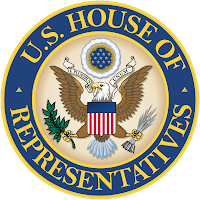 II.
Last week in class, we talked about a variety of things centered around politics and political parties. At the beginning of the week, we centered our discussions around political parties and how age can affect view points. Later in the week, we watched and finished up the movie The Divided State and talked about issues concerning free speech. All in all, this week was very informative as well as interesting.
After using 2 different "Political Calculators" to determine my political party, I have mixed emotions about the results. Before taking any of the quizzes, I thought I was sort of divided between the two parties, but I thought I leaned a little more to the right than the left. My results after using "The Political Compass" sort of showed the opposite of this. It showed me being centrist, but actually leaning to the left rather than the right. The "World's Shortest Political Quiz" showed me being centrist but leaning more to the right than to the left. I find these results very interesting. I feel that the difference in the results comes from the amount and depth of the questions asked. The first quiz asked more questions than the second, so I that would lead me to believe that it would be more accurate. Despite this fact, I still think the results from the first quiz may be off because a lot of the questions were confusing, and I think my results might have reflected that. 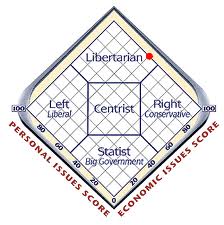 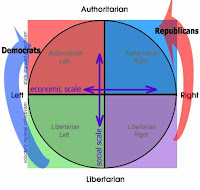 On Friday of last week, we finished up the movie The Divided State, but we did not have a lot of time to go into great detail about our views on the movie. I think that it was important for the students of UVSC to be exposed to other viewpoints than just Conservative ones, but I don't think they should have had to pay for them. Michael Moore, despite how controversial his views are, is still entitled to his right to speak. As long as he is not harming anyone by his speaking, he is protected under the First Amendment just as everyone else is. That being said, I still do not think that the college had to pay that much money to get him to speak. They could have found someone who would have spoken for free instead, and it may have been less controversial. I still do think that there would people against the Liberal speaker, but I do not think that there would as many people against it.

III.
After all of our class's discussions about politics and elections, I am very curious as to how the elections will go on November 2nd. I wonder who will win in Virginia's 7th District? Which party will end up with the majority in the House of Representatives?